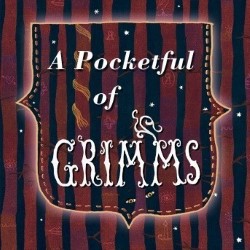 Let the storyteller take you to a land of fables and wonder to explore some of the best fairy tales ever told. Find yourself lost in a host of adventures that are weird, dark, funny and fantastical. An exciting new look at some of the most loved and less well known stories collected by the Brothers Grimm. These tales come to life in a high-energy mix of clowning, physical theatre, puppetry, music and much more. From the same team that created Arabian Nights, winner of the prestigious Primary Times Children's Choice Award at last year's Fringe.

A Pocketful of Grimms goes back to the original telling of stories and sees the Storyteller transporting audiences to a land of fables and wonder to explore some of the most popular fairy tales ever told. This production features well known favourites such as Hansel and Gretel and Rumpelstiltskin as well as some of the lesser known stories such as Lazy Harry, The Golden Goose, Cat and Mouse n Partnership and Fundevogel. The production presents a host of original weird, dark, funny and fantastical adventures.

The play portrays an exciting collection of stories by the Brothers Grimm featuring physical theatre, puppetry, music and clowning. The show is a balanced mix of the funny, the dramatic and romantic. It's a little bit of scary with a large dose of the downright ridiculous!

The ethos of Story Pocket Theatre is that their productions revolve around the telling of fantastic stories; the Brothers Grimms collection features some of the best stories that have influenced storytellers for more than 200 years. To this day, the stories are adapted on stage, film, TV and in countless books. Some stories that are instantly recognised have had modern adaptations. Everyone knows Beauty and The Beast but the original Grimms version, Lily and the Lion, has an extra dimension that is rarely touched upon in the modern versions.

Story Pocket Theatre was set up in 2013 from a passion to produce beautiful, wonderful and magical theatre for families. The theatre company's Patron is master storyteller and author of War Horse, Michael Morpurgo. He says 'It was apparent straight away that Story Pocket's focus was on sharing stories in a bright, imaginative way. My passion for stories and writing has taken me all over the world and I am lucky enough to see my stories in print and on stage and screen. It was Story Pocket's passion for story telling that struck me... I am delighted to be the Patron of Story Pocket Theatre Company.'