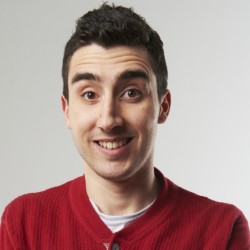 Fresh from supporting Russell Kane on his national tour, this is the highly anticipated debut show from Steve Bugeja, the winner of the BBC Radio New Comedy Award 2013. As heard on BBC Radios 2 and 4, as well as featuring on the BBC red button. Steve recently went to a friend's wedding and on the way had to pick up the bride's Dad who was leaving prison for the first time in 18 years. This is the story of what happened. 'Mines big laughs and gentle pathos' (Guardian). 'Assured comedy, greater things surely await' (chortle.co.uk).

Day Release is the highly anticipated debut show from Steve Bugeja, the winner of the BBC Radio New Comedy Award 2013. Steve recently picked up a convicted criminal from prison who was on day release for the first time in 18 years. This is the story of what happened.

This surprisingly heartwarming true story promises to take audiences on a hilarious and authentic comic journey with one of the most exciting new comedians in the UK. As a comedian, Steve spends a lot of time driving but he never expected to learn something about himself on this unusual 3 hour trip.

As well as winning the BBC Radio New Comedy Award in 2013, Steve was a finalist in both the Amused Moose Laugh Off and Laughing Horse new act competitions, cementing his place as one to watch. Since then, he has toured the UK supporting Russell Kane and performed at the Edinburgh Fringe as part of prestigious package shows The Comedy Zone (2014) and The Lunchtime Special (2013) which led to his appearance on BBC Radio 4's Fresh from the Fringe (also featured on BBC Red Button).

As a comedy writer, Steve has contributed material to an impressive list of TV and radio shows including Mock The Week (BBC Two), 8 out of 10 Cats (Channel 4), Russell Howard's Good News (BBC Two), The Show What You Wrote (BBC Radio 4) and Newsjack (BBC Radio 4 Extra). In 2012 he won the BBC's Funny on Three sitcom competition (along with his writing partner) and BBC's Jesting About sketch competition. Steve is currently developing a pilot with BBC Radio Comedy.