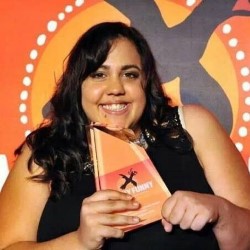 Stephanie Tisdell is an up-and-coming comedienne, originally from Brisbane, Australia. In April 2014, she won the National Grand Final of the coveted Deadly Funny Competition, held at the Melbourne International Comedy Festival, leaving her with the title of Funniest Aboriginal Comedian in Australia. Making fun of her anxiety and awkwardness, she still somehow manages to deliver clever insights on the world and how people are. She has been described as 'fiercely funny and talented' (Deadly Vibe 2014), and her 'up-front comedy style' (Deadly Vibe 2014) has been a winner on stage.