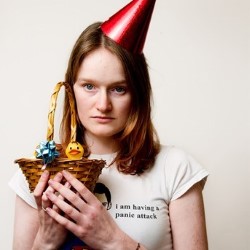 It has come to Stephanie's attention that she is a very silly young woman. Her show will include odd noises, several drawings of ducks, a confession about some vomit, and a song about a newt. We're not saving the world here, people. We're just trying to get by without making too much of a mess on the carpet. Leicester Mercury Comedian of the Year finalist 2015. 'Gloriously silly ... wonderfully unpretentious' (BroadwayBaby.com).

A new hour of comedy from one of the UK circuit's brightest new acts. Witness one woman's attempt to befriend a 1990s pop star using only the power of stand-up comedy.

Goofy and peculiar, Stephanie Laing's comedy is a delightfully awkward marriage of the needy oddness of Maria Bamford and the upbeat affability of Josie Long. Her material is a mix of silliness, filth and unusual observations, underpinned by a disarming honesty and charming vulnerability.

It has come to Stephanie's attention that she is a very silly young woman. Her show will include odd noises, several drawings of ducks, a confession about some vomit, a song about a newt, and Chesney Hawkes. ACTUAL Chesney Hawkes.

Stephanie recently received an email from Chesney Hawkes, and life as she knew it changed forever. She wrote to him asking for a personalised video on CelebVM (www.celebvm.com, you're welcome.) He duly sent one; she emailed him to say thank you, and he replied (breathe, Stephanie, breathe). He even wants to see a video of the final show. And lo, a dream was born.

Stephanie started performing in 2007 on the Scottish comedy circuit. She has previously performed at the Edinburgh Festival Fringe in 2010, 2012 and 2014. She is a rising star of the UK circuit & had performed at The Stand, The Comedy Store, The Comedy Café and Downstairs at The King's Head among others.