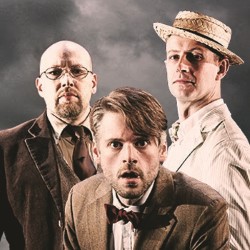 New from award-winning creators of Showstopper! and The School of Night. Three actors spin tales of the weird, macabre and uncanny. If you thought improv was only comedy, prepare to be spooked. Sometimes hilarious, sometimes disturbing, The Society explore the thin line between comedy and horror, between this world and the next... Inspired by writers such as Edgar Allan Poe, H P Lovecraft, Neil Gaiman and Roald Dahl. Extempore Theatre has played the National Theatre, Shakespeare's Globe and the Royal Court. 'The masters of longform improvisation. Have to be seen to be believed!' ***** (Time Out).

Weird Tales magazine reached the peak of its notoriety in the Edwardian age when writers reinvented the horror story, moving it away from Gothic sensibilities and into 'existential terror'. The Society of Strange is an hour of portmanteau horror inspired by groundbreaking writers such as - HP Lovecraft, Edgar Allan Poe, Neil Gaiman, Mary Shelly, Stephen King, MR James, Thomas Ligotti, and many others.

Three actors spin three 'weird' tales of the strange and sinister, all improvised from audience suggestions. If you thought improv was only comedy - think again and prepare to be spooked!

An evening of the unusual and the uncanny, quite unlike anything else before attempted in improvised theatre.

Adam Meggido is Extempore AD and co-creator of Showstopper! The Improvised Musical and The School Of Night (with Ken Campbell). Adam has improvised at The Royal National Theatre, Shakespeare's Globe Theatre, The Royal Court Theatre, The Royal Albert Hall, also for BBC Radio 4 and in nine different countries worldwide. He is the world record holder in directing longform improvisation (55 hours in Toronto). He is also a writer/composer, winner of the 2012 Off West End Theatre Award for best new musical. He recently directed the national tour of Peter Pan Goes Wrong for Mischief Theatre.

Andrew Pugsley is a regular player with Showstopper! The Improvised Musical with which he has performed worldwide and on BBC Radio 4 and BBC1. He MCd the Singalong Oliver! at the RFH and has often appeared with Edinburgh Festival Fringe favourites The Penny Dreadfuls. He trained at the Circle In The Square Theatre School in New York City. He improvises with Panthercannon and is a veteran of the annual London 50 Hour Improvathons.