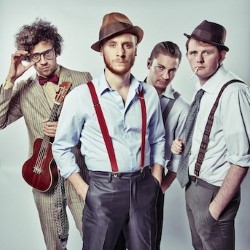 Comedy, meets theatre, meets jazz-fusion. Join the Sleeping Trees as they disembowel western and gangster movies in ways only they can. With a live soundtrack by The Physics House Band. 'The birth child of Monty Python and the League of Gentlemen' **** (Time Out). 'Perfect comic timing, razor sharp writing, and the most dynamic and talented performers I have seen in some time' ***** (BroadwayBaby.com). 'This has to be the start of something like Mitchell and Webb, Pegg and Frost, except they are a trio' **** (FringeReview.com).