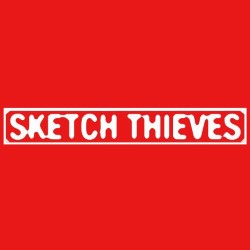 It's comedy set swapping live! The show where comedians perform their own jokes, then each other's. Best comedy club show - London 2015 (Chortle Awards). Top five comedy shows of 2014 (List). Top 10 late nights out at the Fringe (Time Out). 'A brilliant format' (Guardian). 'Birth of a new cult comedy night ... an undoubted hit' (Chortle.co.uk). 'Spontaneous and anarchic' **** (Fest). 'A truly electric night' **** (Scotsman). 'Action-packed and chaotic' **** (BroadwayBaby.co.uk). 'Deserves more than one visit' **** (One4Review.co.uk). As heard on BBC Radio 4 Extra's Comedy Club. Made into a BBC television pilot.

After 2 years of chaotic one-off shows at the Edinburgh Fringe it's time for the sister show of [f]Joke Thieves] to make its full debut. It's the show where sketch groups perform their own sketches and then each others'.

In August 2014 the Joke Thieves format recorded it's very own pilot for BBC2 and is continuing to go from strength to strength in 2015. The beginning of the year saw the show embark on a World Tour, playing to packed houses in Australia, Iceland, Singapore, Hong Kong Manila and the U.K. It has also continued to flourish with regular club shows at The Stand, Edinburgh, Downstairs at the King's Head, London and let's not go forgetting the new regular show at Broadway Comedy Club, New York.

Will Mars - the creator and host of Joke Thieves and Sketch Thieves - is teaming up with audioBoom at the Edinburgh Fringe to catch up with the best comedians hitting the festival. Expect late night chats about the show, the fringe and life as a comedian at the largest arts festival in the world. Listen on AudioBoom