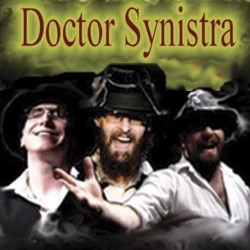 Improv with a dark twist! Doctor Synistra, the possessive host of the show, forces members of the cast to tell improvised horror stories based on audience suggestions. Be prepared for laughs and scares!

As you enter the theatre you will be welcomed by the cast who will show you to your seats and make sure you are sitting comfortably, before summoning Doctor Synistra:

The possessive host of the show will then force members of the cast to tell improvised horror stories based on suggestions from the audience. Be prepared for laughs and scares!

"The idea of Doctor Synistra came from a love of the hosted classic horror films and TV programmes (Tales of the Unexpected, Dr Terrible's House of Horrible, Tales From the Crypt and, even Elvira - Mistress of the Dark) and the curiosity of using a such a character to direct the improvisers on stage. It has been a lot of fun to develop the show, and, because it is improvisation, to continuously learn from it."

"This is a character who loves horror stories. He sets the rules for the stories and improv games and does so with horrific glee. The most important factor is that the improviser playing Doctor Synistra plays the character their way. This gives us a variety of Synistras."

What can happen in a show?

"Strangely anything can happen. Our maddest show (and bloodiest) came from the audience suggestion of 'Rubber Duck'. That show featured scenes of a crew inside a toy submarine who blew up their owners."

"...and I love it when a story has a twist to it. There is something really satisfying about that."