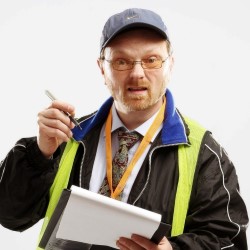 Donald, of Viz comic fame, performs as his most popular character, the hapless market researcher Barry, who spends the whole show desperately trying to find ways to entertain the crowd. In his inimitable floundering style, loveable idiot Barry has attempted to gain the venue's permission to perform an exit survey of the audience, but instead accidently booked himself to perform an hour of comedy. He attempts to use the internet to find someone to help. 'Superb, inventive comedy' (Stage). 'As funny with a microphone as he was with a pencil' (Guardian).