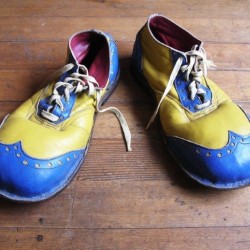 Meet Jimmy and Joe, two comedians who are not so much failed as actively failing, teetering on the brink between has-been and never-was. Riven by internal and external pressures, their comedy partnership has reached breaking point. And there is the small matter of the dead body in the upstairs bedroom... A body which is slowly changing into a clown. Featuring many different kinds of comedy from the broadest to the most sophisticated, slapstick and verbal wit, satire, farce, irony, and sheer filth. Showbiz... is a horrifically funny new comedy from Theatre Found.