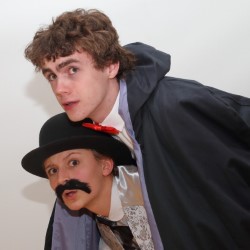 Multiple mistaken identity as confusion and hilarity reign. Antipholus of Syracuse and his servant Dromio meet their twin counterparts from Ephesus, with each being unaware of the other's existence. Add a melodramatic matriarch, a naughty maid and a rowdy mob to create Carry on Chaos meets Laurel and Hardy in this intriguing take on Shakespeare's shortest play. Specially adapted for audiences 7+. 'Fun, frolics and lots of noise' (Peeblesshire News). 'Accessible Shakespeare at its best' (Southern Reporter).