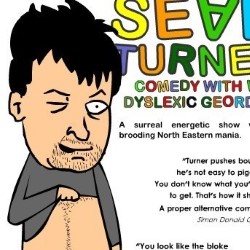 Sean Turner, alternative stand-up comedian, is returning to the Edinburgh Fringe for his second solo Fringe show. Comedy With a Colour-Blind Dyslexic Geordie is a mad hour of stand-up comedy. Full of silly impressions, audience interaction and jokes and stories. Oh and stuff about dyslexia and colour-blindness as well. It's a combination of the best bits from my last show and new stuff I wrote but didn't spell correctly. If you missed last year's show, come see this one, it's all new material.

Comedy With a Colour-Blind Dyslexic Geordie is a mad hour of stand-up comedy its full of silly impressions, audience interaction, jokes and stories. Oh and stuff about dyslexia and colour-blindness as well.

Alternative stand-up comedian Sean Turner has had dyslexia since before he was born. He knows this because the day he came into this world his mother put a Catherine Cookson novel in his face and he didn't have a clue how to read it. Realising this his parents bought him a book where no words instead it was filled with colours. If you look at the pages Sean you see lovely pictures of dolphins boats and a lovely bear. Sean's book was broken as he could see naff all, later he found out it wasn't the book but his eye balls that were faulty.

School was a hard time for me in fact it was a right pisser because I couldn't read and write as well as the other kids. It was like going to a car swapping party on a BMX. It's all different now of course. I do still sometimes have problems with my speeling. I've also just noticed that I've wrote most of this press release in the third person but I'm leaving like that because I can't be bothered to go back and change it.

If you like something different, for example Vic & Bob, or Rick & Ade, then this is the show for you.