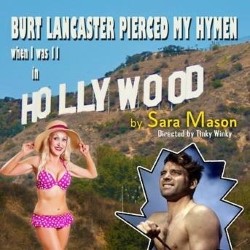 Burt Lancaster Pierced My Hymen is a side-splitting, filthy, compelling and poignant show. The hilarious and slightly bonkers Sara Mason spent her surreal childhood in Hollywood, with film stars, hard drugs, the rich and famous. Anything goes in La La Land so you grow up fast once you've seen the dark side of celebrities.

This is a stand-up comedy show. It tells the true story of how Sara Mason and her younger brother were sexually abused at a Beverly Hills party, by one of the most powerful men in Hollywood. British-born Sara's parents emigrated to LA. Sara graduated from Beverly Hills High School with film stars' children, and future celebrities.

Hilarious stories include: being sent to a Kleinian psychoanalyst from the age of two. Smuggling drugs into America at the age of 16. Fending off sexual advances as a teenager by a psychiatrist from Cedars Sinai Hospital. Marrying a Nigerian. Divorcing a Nigerian.

Written and performed by Sara Mason, directed by Dave Thompson.

Dave Thompson was Tinky Winky in Teletubbies. He's done 4 UK feature films and 2 films shot in Hollywood. Dave's worked with Harry Hill as a performer and writer since 1994. He's performed stand-up in 31 countries.