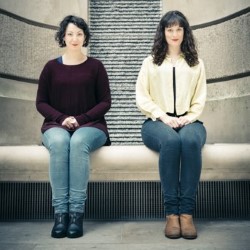 As seen on BBC, as heard on Hoxton Radio and as titled Funny Women Awards finalists 2014. Comedy duo Samantha Baines and Helen Sorren are out there - not in a weird way just in the sense you might bump into them. 13,000 of you watched their online sketch Busy Battle and now you can see them live! Stand-up comedy, sketches and silly chats. 'Sam and Helen are bloody hilarious' (Larry Lamb). 'Hilarious' (BroadwayBaby.com). 'Among those to watch' (Bruce Dessau, Evening Standard). 'A natural gift for comedy' (TheGoodReview.co.uk).

Female comedy and presenting duo Sam Baines and Helen Sorren are out there - not in a weird way just in the sense you might bump into them. Sam's been on TV and Helen's been on many a stage and they've both been out there in comedy competitions galore. They've even been out there on the internet in the comedy sketch "Busy Battle" which went viral (that's an internet phrase not an infection).

In this show Sam and Helen are thinking about what else is out there and up there and down there and there metaphorically and just making their lives seem that little bit more inconsequential. Yes that but with jokes. There will be stand-up comedy, sketches and silly chats.

Samantha Baines and Helen Sorren are actresses and comedians. They currently host Sam and Helen: Ladies What Brunch on Hoxton Radio and with guests like Larry Lamb and Blonde Electra the show has reached top 10 in both the comedy and interview charts on Mixcloud.

Samantha Baines: What the Frock Best Newcomer 2015, Funny Women Finalist 2014, Laughing Horse Semi-Finalist 2014 and as seen on BBC3 and CBBC. She can be seen as Mary in the recently released film A Royal Night Out. Samantha also writes for Huffington Post Comedy and guests on XFM, Radio 4 and BBC London 94.9. Sam will be chatting about the universe, astronauts and Brian Cox.

Helen Sorren: Leicester Square New Act of the Year, Golden Jester and Funny Women semi finalist 2014, Helen is already a recognisable face on the London comedy circuit. Helen is also the 'Goddy' go to girl, having performed for the Pope in Hyde Park and starred in the Christian short film, Not As The World Gives, which now has over 85,000 views on YouTube. Helen will be chatting about confidence, microwaving your pants and disco dancing.