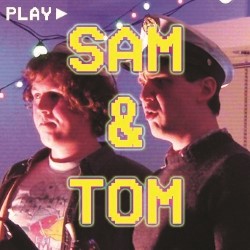 Sam and Tom! are an anarchic double-hander made up of comedic wunderkinds Tom Burgess 'coldly psychotic' (Chortle.co.uk) and Sam Nicoresti 'u suck' (Lucas Bird, YouTube.com). In principle they'll be rocking up to knock out some skits, argue amongst themselves, talk about their time as famed child stars (Nickelodeon, 1997) and generally nail the gig. In a previous life, Sam and Tom! were part of award-winning sketchers Staple/face, winners of So You Think That's Funny? 2013. 'Comedic brilliance' **** (ThreeWeeks). 'Something very different and exciting' **** (Forge Press). 'Giddy, immature ... surreal and funny' (CounterfeitMag.co.uk).