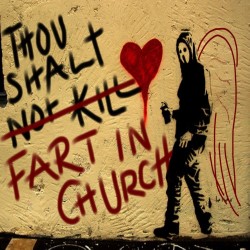 Having stolen something precious, two angels go on the run from God in order to take rules into their own hands. Finding the Ten Commandments, the angels begin to edit the rules to suit themselves, but with hilarious and catastrophic consequences. Arriving in an unknown location and being forced to bargain with a filth-encrusted pervert, Angelus is an extraordinary dark comedy that pushes the boundary between faith and anarchy.