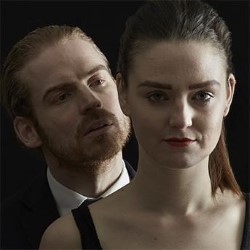 This appearance follows his previous sell-out runs at the festival with Boxman (2014), Bath Time (2013) and Big Sean, Mikey and Me (2012) which all received 5 star reviews.

15-year-old Allie is a young, pimple-popping Edinburgh lass who collects wooden animal figurines and likes to chase bad boys. When she meets the silver-tongued gangster Bobby Warren, a girl's wet dream turns into a woman's bloodstained nightmare. After years of being caught in Bobby's twisted spider web Allie is all grown up and is now out to wreak vengeance on the man who stole her dreams.

Megan Shandley, from Barnton in Edinburgh, graduated from LAMDA last year, where she worked with Max Stafford-Clark among other well established directors. Immediately after graduating she filmed the short film State Zero, which is to become a full-length feature. She writes and performs stand-up and sketch comedy, as well as being part of The Comedian's Cinema Club.

Ruaraidh Murray was born and raised in Stockbridge in Edinburgh and went on to study acting at The Oxford School of Drama. He was a member of the Traverse Theatre and Royal Court Theatre young writers groups and his theatre acting credits include the 10 year stage revival of Irvine Welsh's Trainspotting (No.1 UK Tour), Tom Kempinski's High Jumpers (New End Theatre) and Jimmy Barr's Disintegration and We're All Doing Time (Union Theatre).

In 2013, the Gilded Balloon co-produced the Scottish tour of Big Sean, Mikey and Me and Ruaraidh and the director Paul Robinson are currently in development of the feature film script. Having performed Big Sean, Mikey and Me at the Vault Festival 2015 in London this February, Ruaraidh has been commissioned to adapt all of his one man shows for radio (Big Sean, Mikey and Me, Bath Time and Boxman) which he will perform live this summer on Soho Radio, London in the run up to Edinburgh Festival Fringe 2015.

Ruaraidh has a starring role in the new British feature film Night Bus which, was officially selected for the BFI Film Festival 2014. He had a guest role in Tom Fontana's Borgia Season 3, recently aired on Netflix.