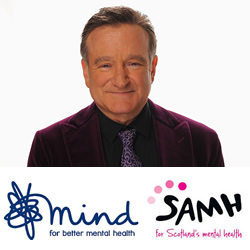 Tuesday August 11th is the first anniversary of Robin Williams' passing. He is much missed. By way of tipping our hat to his memory, and raising money for mental health charities, comedy promoters Dec Munro [Test Tube Comedy] and Isabelle Adam [ACMS, Comedy Club 4 Kids] are putting on a big old benefit gig with the fizziest and funniest stand-ups around. At least one of whom got to gig with the man himself!

The money raised will be split 50/50 between Mind, and SAMH (the Scottish Association for Mental Health). Both charities provide advice and support for those experiencing a mental health problem, or caring for those who are; both campaign to improve metal health services, raise awareness and promote understanding. Both organisations are vital, and we are proud to support their work.

The Weirdos Collective (Whose 2012 Christmas shows saw them perform Spielberg's Hook live on stage, with the award-winning John Kearns in Williams' role of Peter Pan).