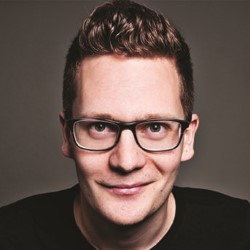 Laughing Horse New Act of the Year finalist 2015 and Star of BBC Radio's The Greatest Welshman You've Never Heard Of presents a half hour of stand-up. 'Nice twisting lines ... his urbanity was welcome and unusual' (Chortle.co.uk).

The star of BBC Radio Wales' The Greatest Welshman You've Never Heard Of ventures northward to the Edinburgh Festival Fringe this year with his half hour show Guten Morgan.

In his first half-hour performance, Cardiff born, London-based Robin brings his best jokes, gags and stories so sharp, the Shard will be looking for pointers. His quick-wit, natural confidence and cheeky story-telling means he's a natural on the stage.

Robin is one of the strongest acts to come out of the Welsh comedy scene in years and has appeared at the UK's top comedy clubs and festivals because of it. He has also previously been the warm-up act for numerious BBC Radio Wales comedy programmes as well as the live broadcast of The One Show (BBC1) when it toured to Cardiff. He boasts an impressive list of radio credits for such a new act including writing for The Leak and The Loser's World Cup (BBC Radio Wales) as well as appearances on Tom Price's Summer Saturdays, What's The Story? and Jamie Owen's Sunday Show (BBC Radio Wales). His debut sitcom The Greatest Welshman You've Never Heard Of debuted in early 2015.