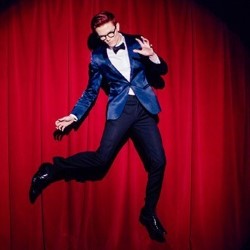 It's ok, I don't know who I am either. 'Belongs on the stage and isn't afraid to show it' (Guardian) 'Cripplingly funny' **** (Sunday Express) 'Refreshingly and believably frank... Trailblazing' **** (BroadwayBaby.com).

The sartorially splendid Rhys Nicholson returns to the Edinburgh Fringe with his stinging wit, a brand new show and a duffle bag of hand made merchandise.

Forward is Nicholson's third Edinburgh show, and follows a year of growing critical acclaim for his incisive comedy, regularly filling theatres across Australia and in the UK.

This year's show is about heirlooms and legacies. When/if he dies, what will he be remembered for? Seventy glittering years in showbiz? Best Tilda Swinton look-alike? Most innovative penis joke?

The champion of self-deprecating, confessional and upfront content, 'Mama Show Business' has left his mark with sell-out Melbourne/Sydney & Perth Comedy Festival seasons, a run at Soho Theatre and performances at Just For Laughs at the Sydney Opera House.

Come to Forward and help Nicholson determine how we'll look back on his life.