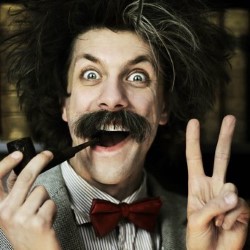 Join Albert, the genius with the übercoolest moustache in science, for a multi award-winning hour of comedy songs and peer-reviewed space-time experiments. Get ready to quantum leap through two World Wars, two theories of relativity, and the dropping of two very big bombs. Warning: features the wurst sausage joke ever. Ages 11-111. 'A treasure...handled with something close to brilliance' ***** (Libby Purves, Times). 'The clearest - and certainly the funniest - explanation of the Theory of Relativity I know' (John Lloyd, Creator of QI). 'A masterclass... Genius, Mr Hinton, Einstein would be proud' (Sunday Times).