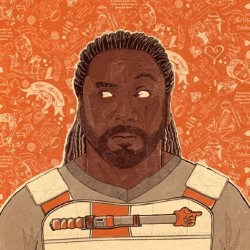 Reginald D Hunter returns to the Edinburgh Festival Fringe this year with a brand new show following his 45 date UK tour and a hugely successful year filming and performing around the world.

Having appeared at the Melbourne Comedy Festival and Sydney Opera House Gala in Australia in 2014, Reginald then made his debut in New Zealand at their Comedy Festival Opening Gala before going on to appear in Auckland and Wellington. He then moved closer to home with his debut tour of mainland Europe before travelling back to his birthplace in America to film the hugely popular documentary series, Reginald D Hunter's Songs Of The South, for BBC2.

Reginald has been in the UK for just under two decades and in that time he has become one of the UK Comedy industry's best-known performers for his distinctive take on subjects including race and sexuality. His work can be brutally honest and is often considered to be controversial but it is always meticulously thought out and he has never been afraid to face challenging issues head on, even when the focus is on his own principles or beliefs.

He is a well-known face on primetime television shows such as 8 Out Of 10 Cats, Never Mind The Buzzcocks and QI and is a frequent guest on Have I Got News For You. He has appeared in Argumental for Dave TV, Would I Lie To You and Live At The Apollo for BBC1 and starred alongside Andy Hamilton in BBC4's It's Only A Theory.

Reginald has toured the UK almost constantly since arriving here - entertaining a diverse audience from teenagers to grandparents in some of the country's most iconic venues.