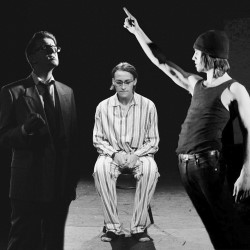 In a new pitch black comedy, three 'salesmen' reunite in a shabby apartment in the middle of nowhere. What begins as a light-hearted affair soon turns into a much darker occasion, as the three men's jovial discourse becomes tinged with threats and aggression. Soon an unexpected fourth guest arrives, an ambivalent figure who raises the tension even further. The audience watches as a game of one-upmanship cascades into a wild power struggle, as more of each character's shady past is revealed.