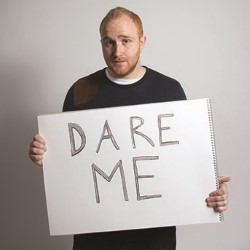 Going on a date with Scotland's oldest woman... Dancing in a Bollywood film... Tackling the globe of death... Representing his country at a sport... Scottish comedian Ray Bradshaw has given up a year of his life to undertake these dares, amongst many others sent to him by strangers on the internet. Find out how he succeeded, and where he ended up on his year-long adventure. 'Very funny' (STV). 'Brilliant grinning storyteller' (Skinny). 'Has a clear comedy gift' (Edinburgh Evening News).