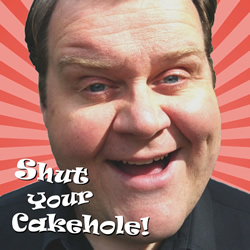 Shut Your Cakehole. The intimate ramblings of Quinn Patrick, a council house kid who is now a man. More of an oddity than Odyssey! Meet some of the colourful characters he has met along the way. 'Anarchic' (BritishTheatreGuide.info). 'A vital ingredient to this year's comedy mix' (Stage).

A familiar face from the recent Britain's Got Talent idents, and a regular stage performer, now Quinn Patrick takes to the comedy scene making his solo debut at the Edinburgh Festival Fringe.

Shut Your Cakehole sees Quinn telling the intimate ramblings of a council house kid who is now a man. More of an oddity than an Odyssey, the audience will be introduced to some of the colourful characters he has met along the way.

After leaving Southend College, Quinn began his professional career by forming his own theatre-in-education company before winning a scholarship to Mountview Theatre School where he graduated with a BA Honours degree. Theatre credits include Teddy in Arsenic And Old Lace, Judd in Bouncers, Norman in Lucky Sods, Mr Mushnik in Little Shop Of Horrors, and numerous appearances in children's shows and pantomimes. Television credits include the BAFTA winning Ha Ha Hairies and Grandpa In My Pocket, Without Motive, Casualty, and Castoffs. Quinn has recently filmed Danny And The Human Zoo for BBC and Red Productions, which will be aired during the festival.