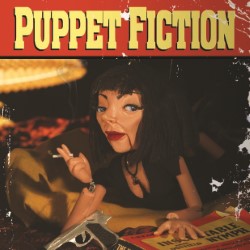 Puppet Fiction has been a cult hit since its first performance at the tiny Pitt Bar in Wellington, New Zealand, in 2012. The show pays homage to the mighty film Pulp Fiction, with 17x 40cm tall marionette replicates of the main characters.

The puppets deal with and deal out violence, humour, love, lust, drugs, signs from God, razor sharp dialogue, improv and iconic speeches. There's also the joy of live puppetry; a stuck jaw, awkward effects, the tangle of strings during a love scene; guaranteeing a unique and hilarious theatrical experience. The cast of three, with puppet maker and master Jon Coddington, actress Anya Tate-Manning and award-winning Welsh/Samoan comedian James Nokise, will triumph over every pending disaster while portraying all of your favourite characters, under the skilled direction of Hannah Clarke, Producer of the New Zealand Fringe Festival.

"Everybody be cool, this is a motherf#$%ing puppet show!"

The Ultimate Tarantino homage, Puppet Fiction has performed in festivals around New Zealand and Australia, including Perth Fringe World, Adelaide Fringe, Auckland Fringe, Wellington Fringe and Dunedin Fringe. Now one of the smallest shows in the world comes to the biggest fringe festival on the planet.