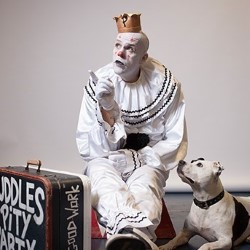 With more than 100k fans worldwide on Facebook and over 20 million views on YouTube, the unique and critically lauded Puddles Pity Party is a must-see for the music and comedic talents of one of the world's most famous clowns. Star of the Olivier Award-winning production of 'La Soiree', Puddles continues to trot the globe, singing his sad anthems for all the party people and finally bringing his comedy cabaret to Edinburgh! 'Without a single spoken word Puddles can muster more audience chemistry than most ... it is an enthralling performance.' ****1/2 (Advertiser, Adelaide).

The unique and critically acclaimed US cabaret & comedic performer Puddles makes his Edinburgh Fringe Festival month long debut this year with his show Puddles Pity Party. With more than 100k fans worldwide on Facebook and over 20 million views on Youtube, including his acclaimed version of Lordes' Royals alongside other pop favorites like Abba's Dancing Queen and tunes from Tom Jones to Sia, this show is a must-see for both his music and unique comedic hijinks.

Puddles Pity Party has toured extensively in the US where his sold out US performance schedule included the acclaimed Punchdrunk show Sleep No More, where he performed more than 50 times as well as Joe's Pub in NYC and the legendary Troubadour in Los Angeles. Last year he starred in the Olivier Award winning production of La Soiree at the Southbank Centre in London; he just completed his first festival run in Australia where he performed at both the Adelaide Fringe and the Melbourne International Comedy Festival. He has also performed at the Just for Laughs Comedy Festival in Montreal, Austin's Moontower Comedy Festival and at the Teatro Zinzanni speiegeltent in Seattle, Washington where he spent six month as a featured performer.

After an amazing three years performing around the world Puddles continues to trot the globe with his acclaimed show, singing his sad pop anthems for all the party people finally making it to the Edinburgh Fringe Festival for the first time.