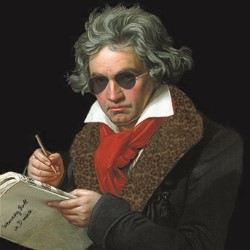 Ludwig van Beethoven has written operas, sonatas, and symphonies. What's next for the immortal genius? Why, a swinging cabaret act, of course! Join Beethoven as he sings about his angry mistresses, his rivalry with arch nemesis Mozart, and his senile mentor Haydn. With his trusty stage manager Kathy by his side, Beethoven bemoans Bieber, sighs about Cyrus, and tells you the one thing wrong with One Direction. Roll over, Beethoven? Not tonight! Ludwig Live! is written by multiple Emmy Award-winning writer Nancy Holson. 'Funny enough to make me choke and gag with laughter' (J Peter Bergman, BerkshireBrightFocus.com).