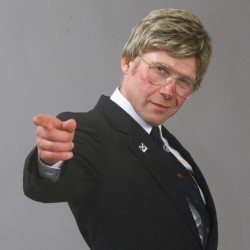 The legendary retired football manager, turned alcoholic pundit from hell is back from his fact-finding mission to Qatar, and still talking balls. Expect some outrageous views on football, some random filth and plenty of drink-fuelled rage on life in general. Plus Bob's now legendary question and answer session. Any question may be asked, any answer will be given. A Fringe favourite every year since 1998 - sadly the last time Scotland actually qualified for the World Cup! 'Foul-mouthed and politically-incorrect' (Scotsman). 'Razor-sharp observations of the British psyche' (Guardian). 'Almost better than football' (Independent).