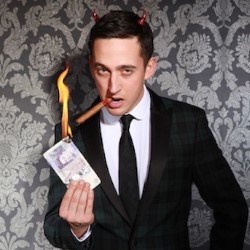 Dabek returns to Edinburgh armed with his box of tricks and razor-sharp wit to spread madness, mirth and mischief! Expect edgy quick-fire comedy, dirty shadow puppets and jaw-dropping magic with 'machine-gun delivery' (Scotsman). 'Superb Showman' (Time Out) 'World Class... Don't miss out!' (Talk Fringe) 'Paul Dabek is definitely the funniest magician I have ever seen... Dabek will not disappoint.' (Advertiser) 'Dabek has everyone on the edge of their seats...you will love it: Dabek is hilarious, versatile and infectious' (RipItUp.com).