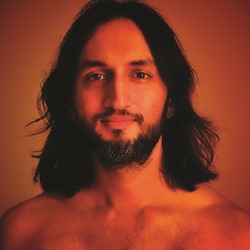 Five-star latest from winner of Asia's Best Stand-Up Comedian Award 2014 and Last Comic Standing finalist. In this autobiographical show, Papa CJ bares all with tales of childhood, school, love, sex, passion, heartbreak and hope. He'll definitely make you laugh, possibly make you cry and might even change the way you look at your own life. 'An Indian Chris Rock' (ManchesterComedyGuide.com). 'Slick and eloquent' (Chortle.co.uk). 'Reliable crowd-killer' (Time Out). 'The global face of Indian stand-up' (Forbes Magazine). 'You will walk out vowing to tell your friends about this comedian' (Herald Sun). Credits: Comedy Central, Showtime and NBC.

With sell-out tours across five continents, Papa CJ is one of the world's leading international and globally successful comedians. Born to a simple Indian family, he realised the working-class dream by completing his MBA from the University of Oxford and, landing a consulting job in London, subsequently threw it all away to follow his heart. And it is here in his 2015 Edinburgh show that his heart is truly Naked.

In this autobiographical show that straddles the realms of stand-up comedy, theatre and storytelling, Papa CJ bears all with tales of school, work, love, sex, passion, heartbreak and hope. Witness this incredible story that became the first ever show from India to be invited to premiere at the Melbourne International Comedy Festival that will make you laugh, cry and possibly change the way you look at your own life.

Not only a rising star in cities from Melbourne to Mumbai, Papa CJ represented India on NBC's TV show Last Comic Standing in 2008 and, from the thousands of global contestants, was placed in the Top Ten. He was the first Indian comedian to be invited to perform at Canada's prestigious Just for Laughs Festival and, not only has he appeared on numerous TV channels including Comedy Central, MTV, NBC, Paramount Comedy, ITV, BBC America and Showtime but he has performed at a police station, in a hospital emergency room whilst holding the head of a girl getting 32 stitches, and even at gunpoint!

But it is not only his comedy that Papa CJ is renowned for in his homeland; founder of the charity One Child, he helps provide for the education, health and overall development of children in rural India, striving to eradicate child labour and getting children back into the formal schooling system. He also runs The Best Medicine, performing for free for patients, their guests, doctors and nurses in hospitals around the world, Serving Those Who Serve Us, also performing for free with other comedians from his Comedy Company for the Armed Forces of India, and Great Comedy For A Great Cause, a regular fundraiser gig to support charitable initiatives. He is also a qualified Laughter Yoga Leader.