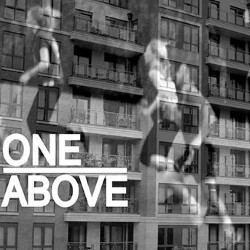 Persons A, B and C LTD are three promising modern individuals who are desperate to innovate, adapt and compete for your consumer investment. Not doing so will result in abandonment, so they must keep going whatever the cost. This high octane and original performance by PALP is a savagely humorous response to the crisis of individual identity in a world of instant gratification, one-upmanship and inside-out commodification.

We are PALP; a newly formed theatre troupé from London making our debut at this years Fringe Festival.

Persons A, B and C are three promising individuals here to innovate, adapt and compete for the sacred opportunity of a position at One Above. As the intensive screening process unfolds, the persons start to resemble greyhounds chasing a metallic rabbit round whatever bend comes their way. They are all willing to go the very end but what is really gained when the be all and end all is individual success?

Fringe First for PALP, One Above is a savagely humorous response to the crisis of identity in an economy where the neoliberal narratives of oneupmanship, the perfectible human being and inside out commodification seem to be increasingly celebrated.