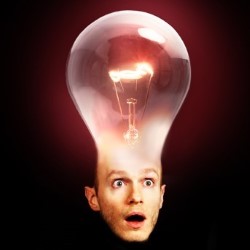 After sell-out runs in 2013 & 2014 (When Magic & Science Collide), Oliver Meech returns with a unique comedy magic show created at the drop of a (top) hat from audience suggestions. They shape the show - the characters, the music, even the tricks themselves. Flying in the face of hundreds of years of magic dogma, Oliver must rely on fast fingers, quick thinking and a ready wit.

Discover the incredible life story of a made-up magician, illustrated with amazing tricks. Magic, improvisation and storytelling combine in a way that's never been done before. Always unpredictable, always inexplicable.

Oliver studied Psychology at Oxford University, Creativity at top London advertising agencies, and Trickery at The Magic Circle. He combines all three to produce magic that's 'fascinating and different from other magicians' (GWJWTBE blog). He has acted as Magic Consultant for the Discovery Channel and filmed with the people behind E4's Troy.