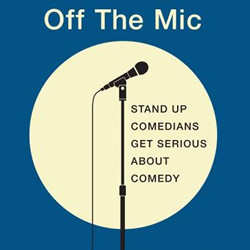 A book launch. Stand-up comedians get serious about comedy.

What is it to be a stand-up comedian? To be funny, solo? You have no character-role, no double-act partner, and nowhere to look but out into the darkness, with just a microphone, an audience and your imagination.

Deborah Frances-White and Marsha Shandur unpack the inner-workings of the minds of comics in this special one off show to mark the launch of their new book of the same name.