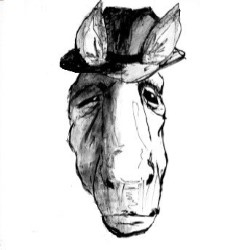 Not the Horse is the new outrageous crime-comedy from the writers and director of NSDF award-winning show The Bastard Queen. Tony is a twenty-year-old scouser who finds himself in a labyrinth of trouble. After losing an illegal horse racing bet with a notorious group of London gangsters, Tony and his friends find themselves looking for any possible plan to come up with £250,000 in four days. After a whirlwind of ideas, accidental robbery, accidental horse tranquilizers and a lot of horse semen, Not the Horse spirals into a loud crashing finish.

From the company that created the award winning show The Bastard Queen, Naughty Corner productions presents its second production, Not The Horse, an outrageously, unapologetic crime comedy which follows three very different groups and their hysterically unfortunate few days.

Tony is a twenty-something 'Scouser' who finds himself in deep sh*t! Horse sh*t, to be precise. After losing an illegal horseracing bet with a notorious group of London gangsters, Tony and his friends find themselves desperately searching for a plan to come up with £250,000 in just four days. After a whirlwind of admirable ideas, accidental robbery, Leonard Cohen, horse tranquilizers and a lot of... well... semen, Not The Horse spirals into a loud, crashing finish.

Naughty Corner is a new Theatre Production Company that debuted at The Edinburgh Fringe Festival 2014. Their first show began as a dissertation piece between five drama students at Edge Hill University. From this, the idea of a post-apocalyptic comedy was conceived, and The Bastard Queen was born. The company won the National Student Drama Festivals - Edinburgh Award 2014, with The Bastard Queen. The play has since been performed at The Lantern Theatre Liverpool and London's Pleasance Theatre (Islington). Their second show, Not The Horse, will run at the Edinburgh Fringe Festival 2015.