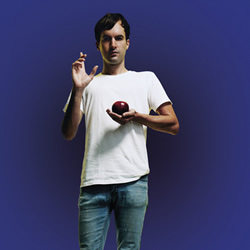 Three weeks ago a glowing druid on a skateboard appeared to Nick Coyle in a dream, and told him to lead a guided meditation, despite being completely unqualified. You can look forward to: lying down, honouring your spirit, rejuvenating your grace, headbutting your self doubt. FYI this is a joke meditation but it is still powerfully cosmic. Winner: Best On Stage, Sydney Music and Culture Awards (SMAC) 2013. Winner: Brisbane Powerhouse Outstanding Comedy, Melbourne Fringe 2011. 'Namaste, everyone. Really looking forward to seeing your spirit and its flesh prison this August' (Nick).