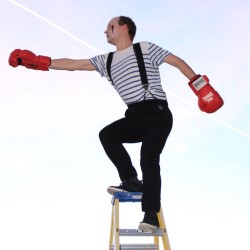 A riotous non-verbal comedy about a nervous man who decides to change the monotony of his life by taking a risk. 'Pushes the cutting edge of mime and interactivity...hysterically funny' (Fringe Review - Highly Recommended Show). 'Utterly foolish...a great deal of fun' (Prague Fringe 2015). 'Brilliant, inventive and far, far beyond silly. One to watch' (Londonist.com). 'I found the entire show downright hilarious and had tears running down my cheeks' (BroadwayBaby.com). 'The innocent idiot' (Steve Bennett, Chortle.co.uk).

Before he's allowed to kick the bucket, every living soul must hear Neil Frost's story. There's only one problem - he can't speak. Therefore, this comedy tale must be told by the audience, who watch a nervous man change the monotony of his life by taking a risk.

The Story of the Nervous Man (a silent comedy) is a riotous hour of clowning, character and living in the moment.

The Story of the Nervous Man (a silent comedy) is his first solo show at the Ed Fringe, it was previously performed at the Camden Fringe '14 and Prague Fringe '15.

Neil is also appearing at the Ed Fringe '15, with his clown troupe Honky Bonk Comrades, in Honky Bonk History of The Beatles.