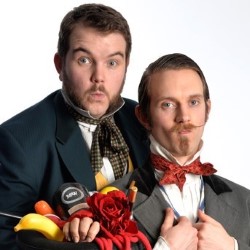 Mr West - "The show is an elegant, erudite and extraordinary display of magical entertainment, which happens to be overrun by noisy, messy, sticky bundles of narcissism"
Mr Morgan - " Ignore him - "Morgan & West's Utterly Spiffing Spectacular Magic show for Kids and Childish Grown Ups" is a fun for all the family magical extravaganza suitable for anyone aged 5 and up"
Mr West - "I refuse to perform for anyone under the age of 21"
Mr Morgan - "No he does not, it is 5 or older"
Mr West - "Emphasis on the "older" part"
Mr Morgan - "Really, ignore him".

Only very rarely does a show come along that is equally loved by adults and children alike.

But as time travelling magicians born in 1865, Morgan & West have had more than enough time to perfect this art.

And so in their new show, our favourite Victorian magic duo set out to provide entertainment that really is thrilling for anyone - of any age, from any time period, and any level of maturity - as they unload another boxful of bafflement and impossibility.

Although tis true that only one of the refined magical gentlemen is totally on board with the idea of creating a show for children. Indeed their squabbles over the idea have been the talk of the town.

But despite their heated disagreements, one thing we can be quite sure of is that audiences will witness a mountain of mysterious magic, a hatful of hyper-reality, and, of course, a truck-full of tricks and tea. Mixing brain busting illusion and good old fashioned tomfoolery, Morgan & West present a show for all the family, where magic and silliness abound!

Recently Morgan & West have been performing across the UK and around the world, including sell-out shows at the Edinburgh Fringe, Adelaide Fringe and Perth Fringe World, where they were nominated for a comedy award. They also won the award for Best Comedy Show at The Buxton Fringe 2013.

Morgan & West are bringing a second show to Fringe this year. You can catch Lying, Cheating Scoundrels - an intimate evening around the card table, exploring shams, scams and dastardly deception, at Just The Tonic. The show was a sell out success in 2012 (partly due to its exceptional quality and partly due to it having 20 seats per performance).