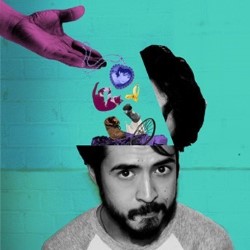 Born out of 500 talks to students about what they want from life, Moj Taylor is seriously in the pursuit of crappiness. He's adopted a possessed cat, shown the nation his bottom on ITV's Dinner Date, and once had a crack and sack wax spontaneously. He will argue that actively seeking out large elements of crap in one's life is an alternate (and surprising) route to true contentment. He'll use stand-up, debate, PowerPoint, and a really crap survey (he proposed it to Ipsos Mori, they declined, so he stole their templates).