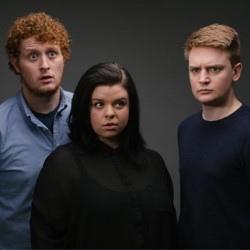 One of last year's best-reviewed shows at the Fringe (Comedy.co.uk) returns with another hour of slick sketch comedy. Fresh from this year's London Sketchfest, book ahead to avoid disappointment. 'This show couldn't get much better' ***** (BroadwayBaby.com). 'Quite unlike any other sketch show you will see' **** (Scotsman). 'Remarkable!' ***** (TheNewCurrent.co.uk). 'Hypersonic comedic perfection!' **** (Skinny). 'We want more!' ***** (EdfringeReview.com).

Minor Delays are Abi Tedder, Harry Michell and Joe Barnes. Their distinct style of stripped-back, front-facing, melancholic comedy is currently part of the Invisible Dot's New Wave. Last summer their debut show at the Gilded Balloon saw them named as one of the Best Reviewed Shows of Edinburgh Fringe 2014 by the British Comedy Guide. This year they are finalists of the London Sketchfest competition.

Abi Tedder starred solo in the Footlights' Harry Porter Prize-winning Anything But (A One-Woman Play) at the Edinburgh Festival Fringe 2012, shortlisted for The Sunday Times' NSDF Emerging Artists Prize. In 2012 she Co-Directed Perfect Strangers (the Footlights International Tour Show) and was a Finalist in the National Funny Women Awards 2012. This year she starred in the National Theatre's new-writing season.

Harry Michell is one half of musical-comedy duo I am, I am who were finalists of the National Musical Comedy Awards 2013. His first short film, Guinea Pig, starring Stephen Mangan, premiered at the London Short Film Festival in January. His first feature, Chubby Funny, is in pre-production with Free Range Films and being shot this autumn.

Joe Barnes was the 2012-13 president of the critically acclaimed Leeds Tealights who were named Best Student Sketch Group by the National Student. He is one half of comedy double act Goodbear and has performed both internationally and across the UK for the Roald Dahl Museum and Story Telling Centre. He is also a member of Dugout Theatre (NSDF Festgoers' Choice Award winners).