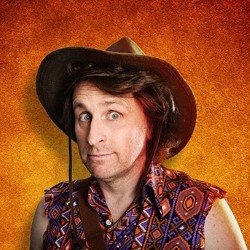 Yes, him with the loud shirts and messed-up hair from Mock the Week, Live at the Apollo, Michael McIntyre's Comedy Roadshow and multiple series on BBC Radio 4. An hour of 'Absurdist one-line masterpieces' (Times). 'He's fast, absurd, and very funny' (Radio Times). 'The best one-liner merchant in British comedy' (Chortle.co.uk). 'No one can touch Jones when he hits his stride' (Guardian). An evening in the company of an idiot. Or is he? Yes he is. Only come if you like jokes, though. If not, you'll be cross.

Following the smash success of previous years and a string of phenomenal five and four star reviews for his new tour Temple of Daft, Milton Jones is coming to the Edinburgh Fringe Festival for 13 days of sheer nonsense and laughter, with no doom in sight.

Join Milton for a side-splitting tale of his madcap journey following in the footsteps of his great-uncle (who er... looks suspiciously like Milton). Unlike previous shows Temple of Daft tells a story, one of a rip-roaring quest to find buried treasure, with an endless stream of ridiculous gags and trademark multi-coloured shirts thrown in for good measure. Will Milton learn that the best treasure is in fact to be found in people's hearts? Let's hope not, that would be really dull. Expect playful props, silly sound effects and lashings of laughs. This is simply not to be missed.

If you liked the Mock the Week star's most recent radio show, Thanks a Lot Milton Jones! (BBC Radio 4) and the stuff he's done on Michael McIntyre's Comedy Roadshow (BBC One), Live at the Apollo (BBC One), Dave's One Night Stand (Dave) or the other ten radio series he has had commissioned for BBC Radio 4, then you will love his new hits, as he cranks up his joke jukebox once more.