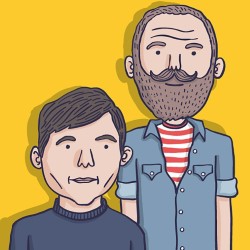 2015 New act of the Year Michael Stranney and Laughing Horse New act of the year runner-up Olaf Falafel bring you an hour of fun filled silly comedy. With a mixture of offbeat characters, one liners, outlandish tales and an irrelevant spinning wheel, they invite you into their wholly unique worlds. "A Delight" Steve Bennett, Chortle.

MICHAEL STRANNEY is a character comedian from Northern Ireland. As well as winning the prestigious New Act of the year award (formerly Hackney Empire New act of the Year) in January, he has also won several other new act competitions including The Max Turner Prize 2015, The Dave Leicester Comedy festival Toilet Duck award and the Tedfest New Irish Comedian of the Year 2014.

OLAF FALAFEL may well hold the self proclaimed title of 'Sweden's eighth funniest comedian' but he is quickly rising up the ranks of the UK comedy scene. His unique mixture of one-liners and Scandinavian-tinged stories earned him second place in this year's Laughing Horse New Act of the Year. Other accolades include being crowned the 2013 Golden Jester and also being named Last Minute Comedy Club's New Act of 2013.