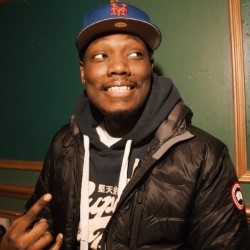 Michael Che from Saturday Night Live and The Daily Show with Jon Stewart returns to Edinburgh to do standup comedy. We can't tell you exactly what this show is about because it starts in August, and he was asked to write a summary in April. It's called 'Six Stars' because six stars is more than five stars. This show is better than a five star show. This show is for the people in the room who want to share a laugh. See it twice. Michael Che won't cry during this performance, unless he drinks too much.

US stand up Michael Che, one of the stars of Saturday Night Live and The Daily Show, returns to Edinburgh with a brand new show entitled Six Stars. The show, which will be performed for 15 nights only, will be at The Stand 3. Six Stars is a show for the people in the room who want to share a laugh. Michael Che will not cry during this performance, unless he drinks too much. This show is the follow-up to his 2013 debut 'Cartoon Violence' which received rave reviews at the Festival.

A native of lower Manhattan, Che's comedy uses humour to identify humanity in the most controversial actions. He applies street culture to world issues with a delivery that The New York Times describes as "a reflective, laid-back stage presence with jokes that draw as much from his city upbringing...as from blunt, insightful points that bring the abstract into focus."

In September of 2014, Che made his debut as the newest co-anchor of Saturday Night Live's iconic "Weekend Update" segment where he is also a staff writer for the show. Prior to joining SNL, he was part of "The Best F*&#ing News Team Ever!" as a correspondent on Comedy Central's Emmy & Peabody Award-winning program The Daily Show with Jon Stewart. In February of 2014, Che became the first-ever stand-up [comedian] to perform on NBC's Late Night with Seth Meyers. This marked his second late night appearance following his 2012 late night television debut on CBS's Late Show with David Letterman. Last year Che also taped his first stand-up special, which aired in June of 2014 on Comedy Central as part of the premiere block of the new season of The Half-Hour stand-up series.

Che has made numerous other television appearances including Comedy Central's hit series @midnight and as a weekly cast member on Vh1's Best Week Ever. He has also been featured on Comedy Central's John Oliver's New York Stand-Up Show, MTV's Money from Strangers, and as a recurring contestant on IFC's comedy game show Bunk.