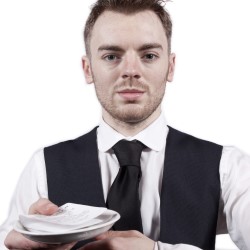 We've all been there. The meal is over. It's time to settle up. But who had what? In this hilarious new comedy from Robin Mitchell, two couples agree to split the bill, leading to confusion and laughs galore as their true personalities are revealed; in future you'll agree to go Dutch!