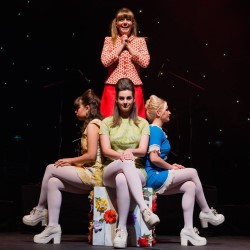 'Theatrical therapy at its funniest' ***** (BroadwayBaby.com). Returning after a smash hit Fringe debut in 2014, this revue tracks six groovy gals as they come of age during those liberating days that made England swing! A non-stop journey through the infectious pop anthems and ballads of the 60s! With a live band and new arrangements of such chart-topping hits as To Sir With Love, Downtown, You Don't Have to Say You Love Me, Son of a Preacher Man, and Goldfinger. Produced, directed and performed by graduates from Liverpool Institute for Performing Arts.