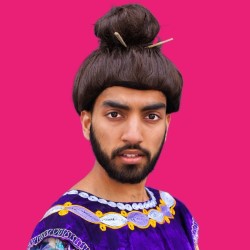 BAFTA nominated DNN star performs his debut solo show, FLUU. Mawaan Rizwan has accumulated over 20 million views on YouTube through his absurd sketches. Using clowning and stand-up he explores controversial topics such as eggs, lamps, cows and things merging with other things. He also addresses himself in third person when writing blurbs.