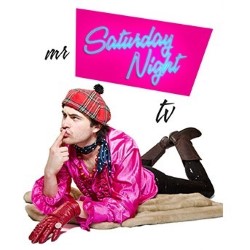 Back in the day, Saturday night TV was the thing to stay in for. What happened to programmes like Blind Date, Gladiators and Stars in their Eyes? From the creator of Britain's Got F*ck All Talent, Jellybean Martinez has created his own Saturday night TV show of pure entertainment, madness and lots of fun. 12th August is Robin Williams day with all the profit going to Scottish Association for Mental Health. 'Works the crowd like a pro. Could he be the next Michael Barrymore?' (Chortle.co.uk). 'Exuberant, silly anarchic fun...' (Scotsman). 'Outrageously funny' (Adelaide Advertiser).

This year I am performing my first solo show Jellybean Martinez - Mr Saturday Night TV at the Edinburgh Fringe. In the past I have found success with my show Britain's Got F*ck All Talent! and now I feel the time is right to go my own way.

Last year I was very fortunate to pick up the 'Best Newcomer Award' at the Scottish Comedy awards whilst also taking my show over to the Adelaide Fringe.

Originally inspired by my first review "Works the crowd like a pro. Could he be the next Michael Barrymore?" (Chortle), this year's show is all about old school Saturday night television programmes such as Blind Date, Gladiators, Stars in their Eyes and many more. It includes characters, multi-media, improv, magic, music and audience interaction.

The show runs from the 6th - 29th of August (not 18th) and on the 12th I am hosting my very own 'Robin Williams Day' in honour of my hero with all of the profit going to the Scottish Association of Mental Health.