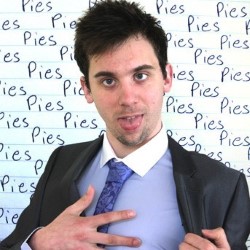 Innovative, absurdist comedian Mat Ewins returns to the Edinburgh Festival Fringe with Day Job - a brand new character sketch show about following your dreams. Discover a style of comedy that you never knew existed, but won't be able to forget.

For 30 years Ewins has been the top sales rep at the Plymouth Pie Factory. Tonight there's a talent show. Tonight Ewins quits his day job. Armed with a cunning plan to ensure that none of the other competitors show up, Mat Ewins attempts to impress by recreating their talents.

Specialising in "well-produced bullshit" (Mat Ewins), Mat's inspired use of video and multimedia, gag heavy sketches, instinctive comic timing and healthy dose of the absurd culminate in a truly unique, tricky to describe combination of stand-up, character, sketch and shambles.

Since making the final of the Chortle Student Comedy Awards in 2009, Mat Ewins has been lying to interviewers to amuse himself at any given opportunity. He's also one of the creators of underground cult hit The Bearpit Podcast Podcast alongside John Kearns and Adam Hess and recently attempted to walk 80 miles from Peterborough to London in 27 hours as part of Mark Watson's 27 hour show for Comic Relief. Day Job is his fifth Edinburgh Fringe show.