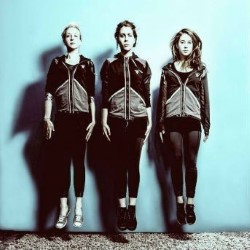 Sketch comedy masterminds Massive Dad are back and they've brought a show with them. Join them for the absolute best of their material so far - 'even the throwaway jokes are hilarious' **** (Guardian). As seen at BBC Potterrow, Latitude Festival and BBC Radio 4. Best New Sketch Act finalists 2014 and Time Out Ones to Watch. Book now before they sell out or the festival ends. 'Outstanding' ***** (ThreeWeeks). 'For a how-to-guide on sketch comedy, see Massive Dad' **** (Time Out). 'An idea of what comedy's future might look like' (Independent).

Rising stars of sketch comedy Massive Dad return to the Edinburgh Fringe - and they've only brought a brand new bloody show, Massive Dad 2.0: Step Up 2 Massive Dad, with them.

The trio, made up of Tessa Coates, Stevie Martin and Liz Smith, burst on the scene last year with their sell-out debut show, which Time Out described as 'an impressively slick debut show that's brimming with smart, unexpected jokes', whilst The Guardian added that 'even the throwaway jokes are hilarious.' Once again, they are one of only a handful of shows to be produced by The Pleasance.

Massive Dad have already secured a wave of accolades and acclaim, reaching the final of the Best New Sketch Act competition, being named by Time Out as 'Ones to Watch' and joining The Invisible Dot ranks as part of the New Wave.

They were invited to perform on Edith Bowman Presents...Her Revue Show and BBC Radio 4's Fresh From the Fringe, appeared alongside Rowan Atkinson in his Mr. Bean sketch for Comic Relief 2015 and stormed Latitude in their first appearance at the festival last year.

Individually, their credits include Comedy Central's Brotherhood, Radio 4's NewsJack and Russell Howard's Good News, whilst Liz most recently played the regular role of Ruby on the Tory bus in Andy Hamilton and Guy Jenkin's satirical election comedy for Channel 4, Ballot Monkeys and will appear in Susan Calman's Radio 4 series Sisters. All three members of Massive Dad have journalism experience having written for publications including the Sunday Times, the Evening Standard and ES Magazine. Massive Dad are also currently developing a television project with Monkey Kingdom as well as regularly making video content.