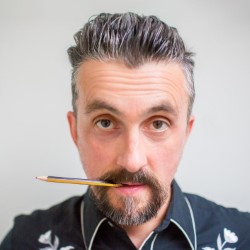 Growing up, my preacher man father made me draw Bible stories. I don't remember the stories, but I draw great. My previous shows had short jokes, and tall stories. I thought it was high time to combine these with my drawings. Especially since Rolf Harris left a gap in the market. A modern day comedic and visual take on those Grimm's classics: Cinderella, Snow White and Little Red Riding Hood. A reality-tale for the 21st century. A children's fable for adults. 'Probably the most absorbing show I have seen. Completely spellbinding' **** (Chortle.co.uk).

Fresh from the Melbourne and New Zealand Comedy Festivals and a run at the Soho Theatre, acclaimed comedian, Markus Birdman returns to Edinburgh with Grimm Realities - a live illustrated collection of children's fables for adults and other reality tales for the 21st century.

As a teenager, Markus Birdman's father made him draw Bible stories. This developed into a skill for drawing that he is now combining with his short jokes and tall stories to create a spellbinding experience. Taking as a starting point The Grimm's Fairytales of Cinderella and Little Red Riding Hood, Markus has rewritten and illustrated these classics to fit his personal narrative as the father of a ten year old girl. The result is not only a masterclass in art but a show that hilariously reflects his thoughts on religion, sexuality, relationships & talking to your children about the birds and the bees. His father's bible stories have been of no use to him, but he hopes these modern day tales will be of use to his daughter as she enters into the choppy waters of her own teens.

Grimm Realities follows neatly on from Birdman's previous autobiographic shows 2B Or Not To Be, Son Of A Preacher Man, Sympathy For The Devil, Dreaming, Love, Life & Death, One Step Beyond and Happily Ever After.

Markus has performed stand-up all over the world from New Zealand and Australia to Thailand and Singapore as well as being a regular at The Comedy Store in London. He has toured with Paul Sinha, Francesca Martinez and Noel Fielding and recently created original murals as part of Mark Watson's 25-hour show and 27-hour show for Comic Relief. In 2014, Markus received a nomination for Best International Act from the New Zealand Comedy Guild. He was also named one of Time Out's Top Ten Comedians 2013 having previously made the finals of the BBC New Comedy Awards, The Daily Telegraph Open Mic and Leicester Comedy Festival New Act of the Year. His TV and radio credits include How Not To Live Your Life (BBC3), The NZ Comedy Gala (TV3), Loose Ends (BBC Radio 4) and his comedy special Live from Toomler, Amsterdam has been featured on Netflix.